He trains every day for 2-3 hours making sure he keeps himself pumped.

As he turns around in just a Calvin Klein assless string we see his amazing bubble butt squashed together like huge juicy melons.

Christian has faint tan lines which really show up when he is in the shower as he spins around again we get to see his thick uncut German dick which curves upwards slightly.

Like many bodybuilders, Christian shaves his pubic hair so he has a smooth ball sack that stays tight as he jerks his dick.

He’s constantly on the move and as he stands at the window we get another glimpse of his fantastic ass cheeks.

Christian is a serious guy and knows how to pose for the cameras and is especially relaxed being naked in front of our cameras. 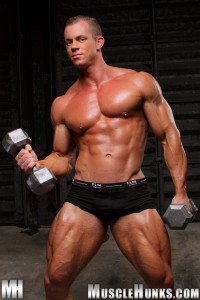