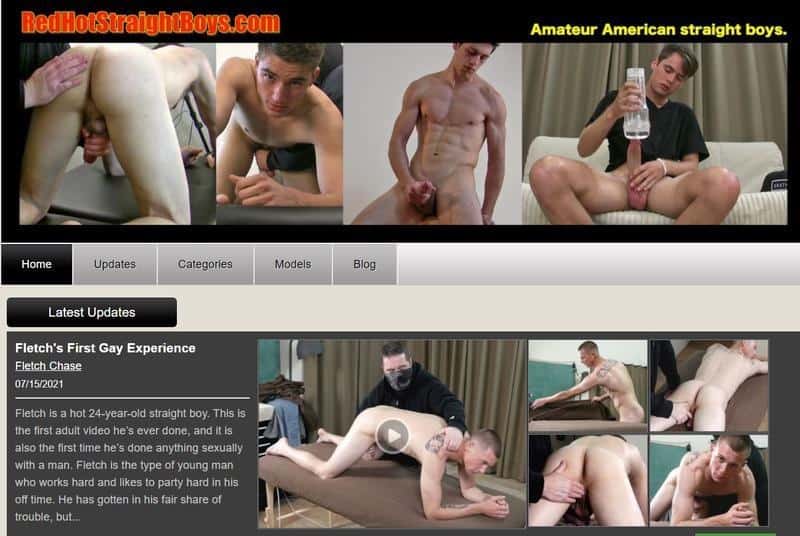 Red Hot Straight Boys involves American straight dudes stripping and jerking off in front of the cameras. Hard-up straight guys get paid to perform for the entertainment of us gay guys.

The site features guys aged 18 to 25 years of age, of all types, who are straight in off the street, amateurs. So you get a heady mix of boy-next-door, soccer jocks, military men, emo skater boys, and everything in between. The guys are mostly white American boys. There is really something for everyone in their lineup and they are introducing new guys each month.

Many ‘straight boy’ sites pretend that their performers are really straight but they are actually gay or bi but then they play at being straight in a non-convincing way. With Red Hot Straight Boys you get a chance to assess their straightness for yourself as each of the new guys has an introductory interview where you can get a feeling one way or the other. I felt that almost all of the guys I watched being interviewed were straight but with some, you never really know.

The guys strip and then jerk off and this is pretty hot especially if you like straight guys. But of course, the guys are enticed to come back and push their boundaries a little bit further. This seems to work wonders, and I guess the extra cash they are offered probably helps but you do see these straight guys involved in more activities as time goes by.

Slowly over time, the site owner broaches the subject of being wanked off by another guy than being sucked off then in some cases, (not all I must admit) a guy will agree to fuck or be fucked by another straight stud. This is kind of what I like about this site is that you see obviously straight guys making the calculation that they can earn an extra bunch of dollars if they go a little further and this lowers the barrier each time.

Red Hot Straight Boys has around 100 videos. With updates twice per month in 2020 the videos are either interviews with new straight boys or videos entitled Defiling ‘Model’s Name’ where the boy is massaged or abused by a sex toy. Each video is around 15-20 minutes in length and there is a good description of the video contents plus some back story information on the featured straight boy.

An example of the two types of videos are as follows:

Interview videos – we meet 20-year-old Chase where we find out about him and get him naked.

Defiling Videos – we see a Defiling video starring 21-year-old Carter List in his 2nd video where he is penetrated with a sex toy.

Videos are available in MP4 format for download and streaming in various sizes. All videos are of good amateur quality with good sound and lighting. They make use of split-screen filming so you can see the guy’s face as well as a close-up of where the action is taking place. This works well and is a feature not seen on other sites.

Videos mostly come with a set of good quality screencap pictures so that you know what the video contains without seeing it first. The images can be viewed as an automated slideshow or you can save each individual photo. Unfortunately, there are no downloadable zip files of images.

Each of the straight boys has their own biography page which gives some information about them plus a list of their videos and photosets.

Red Hot Straight Boys is a great idea and is pretty popular but it would be nice if they could update the site weekly instead of fortnightly as they currently do. The videos are definitely unique and exciting so I would say more, please.

Red Hot Straight Boys involves American straight dudes stripping and jerking off in front of the cameras. Hard-up straight guys get paid to perform for the entertainment of us gay guys. Click here to visit Red Hot Straight Boys The site features guys aged 18 to 25 years of age, of all types, who are…